Home Free eBooks How to Add a WordPress Image Caption

A caption is the small piece of text that appears beneath an image, usually to give it additional context or provide source attribution. While image captions might seem like a small thing, they can demand even more attention from readers than the regular text in your content. Some experts, like those at Copyblogger, even recommend using 2-3 sentence captions underneath important images.

For that reason, it makes sense to pay attention to captions on your WordPress site (and you’ll notice that we also use captions in all of our content here, except for our featured image). To help you start using captions for your own images, we’re going to dig into how to add WordPress image captions.

We’ll cover a few different applications, but you can always click one of the links below to jump straight to a specific section:

How to Add WordPress Image Captions

In this section, we’ll cover how to add a WordPress image caption that you use in an individual post or page. To get started, either create a new post/page or edit the piece of content where you want to add the caption.

Then, click on the Add Media button in the WordPress editor to upload or insert an image:

How to add a new image in the WordPress editor

Once you locate an existing image or upload the image you want to add a caption to, click on the image preview thumbnail to select the image.

Then, look for the Caption box under the ATTACHMENT DETAILS section. Enter your desired caption in the box and click Insert into post: 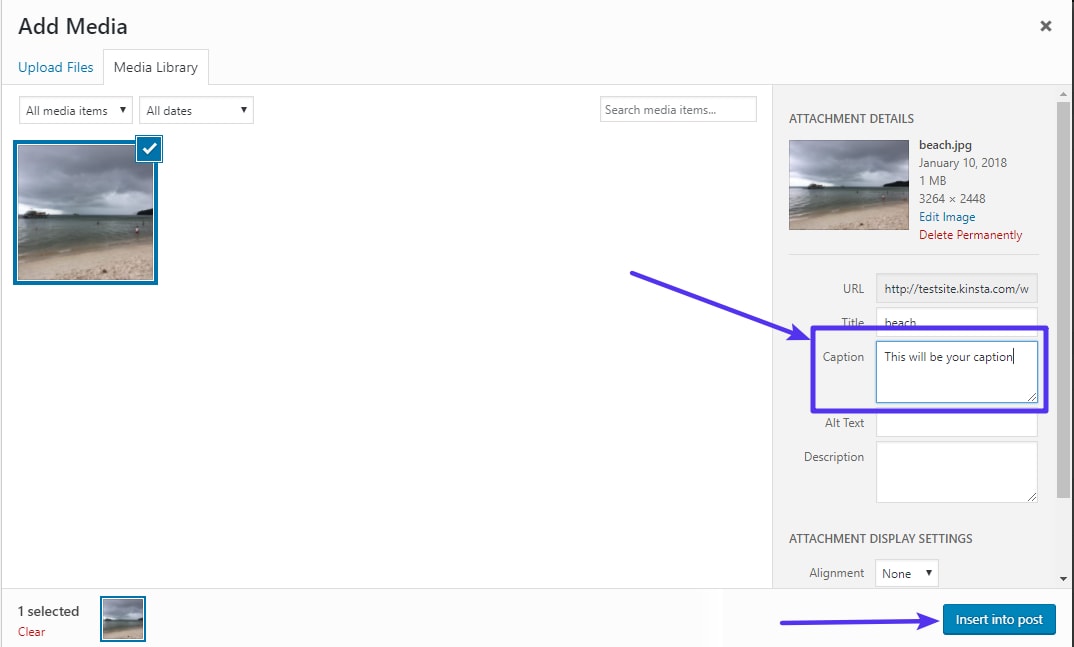 Select a specific image to add a caption to it

And that’s it! You should see your caption underneath the image in the WordPress editor and you’ll also see it appear on the front-end: 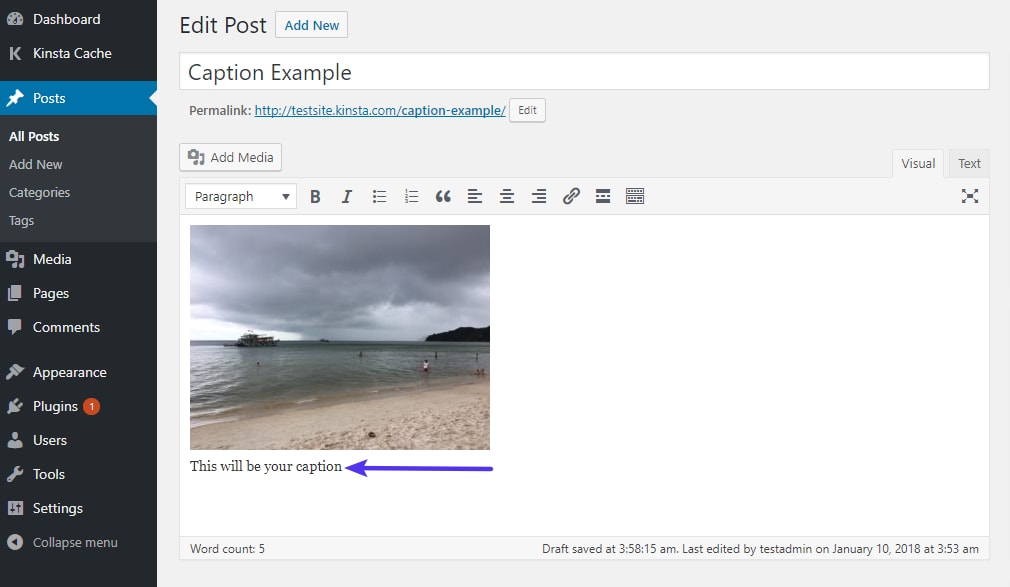 WordPress supports image captions out of the box. However, how your caption looks on the front-end will be determined by the specific WordPress theme that you’re using. If your caption is missing or not styled the way you want, we recommend reaching out to the developer of your WordPress theme for changes. Most of the time it is simply a small CSS tweak that is needed.

We’ll also dive into a WordPress plugin below that can help give you some additional control over how to style the captions on your WordPress site.

How to Edit the Caption for an Existing Image 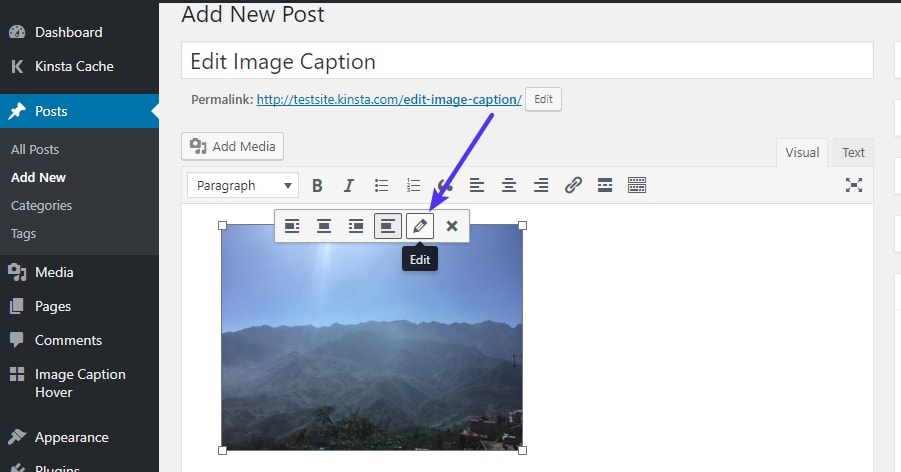 How to edit a WordPress image 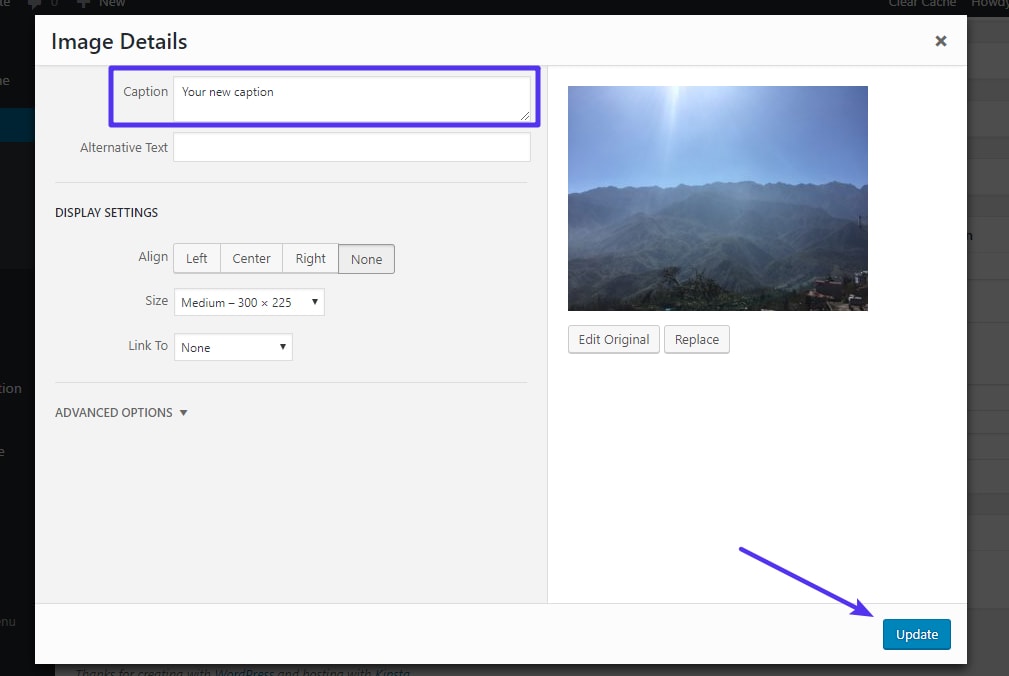 Where to add the new caption 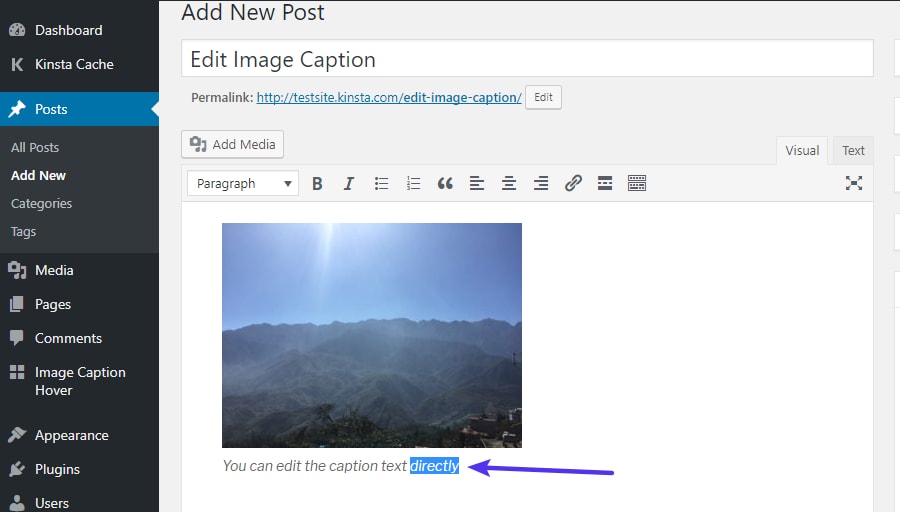 Again – this last method only works if you’re editing the caption for an image that you’ve already added a caption to.

How to Add Caption to Images in WordPress Gallery

You can use a similar method to add captions to images that you use in regular WordPress galleries.

To get started, create a new gallery: 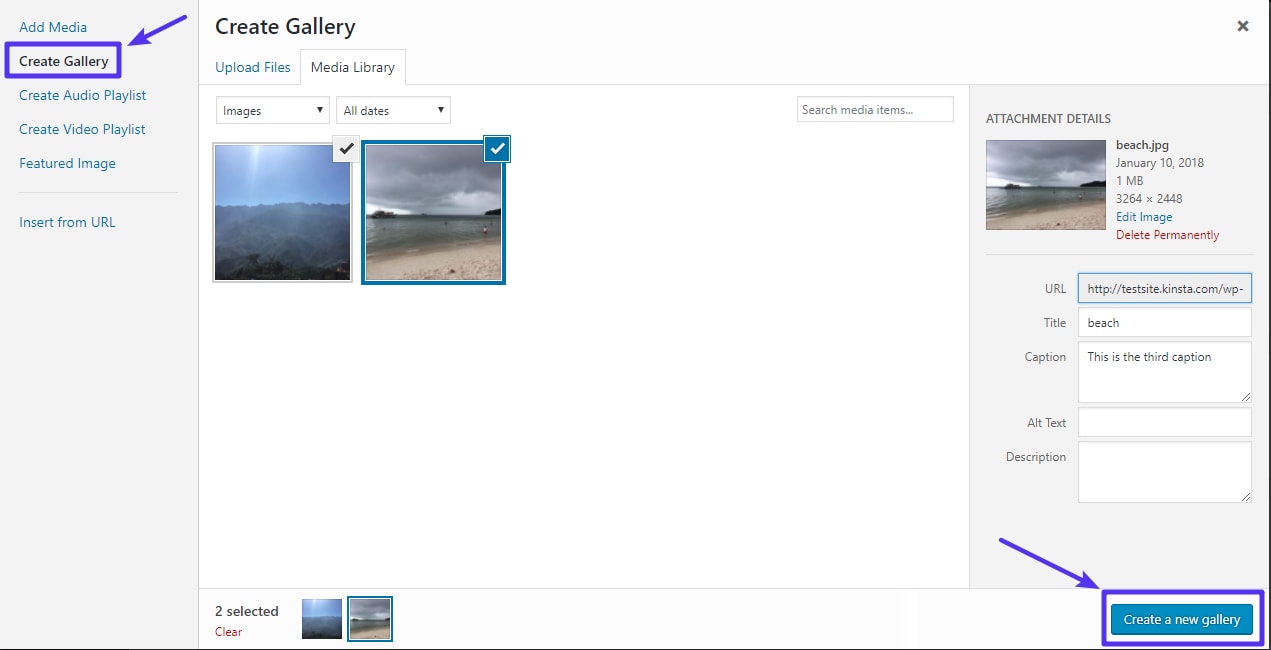 How to create a new image gallery in WordPress

Then, you can edit each image’s caption by using the box underneath each image: 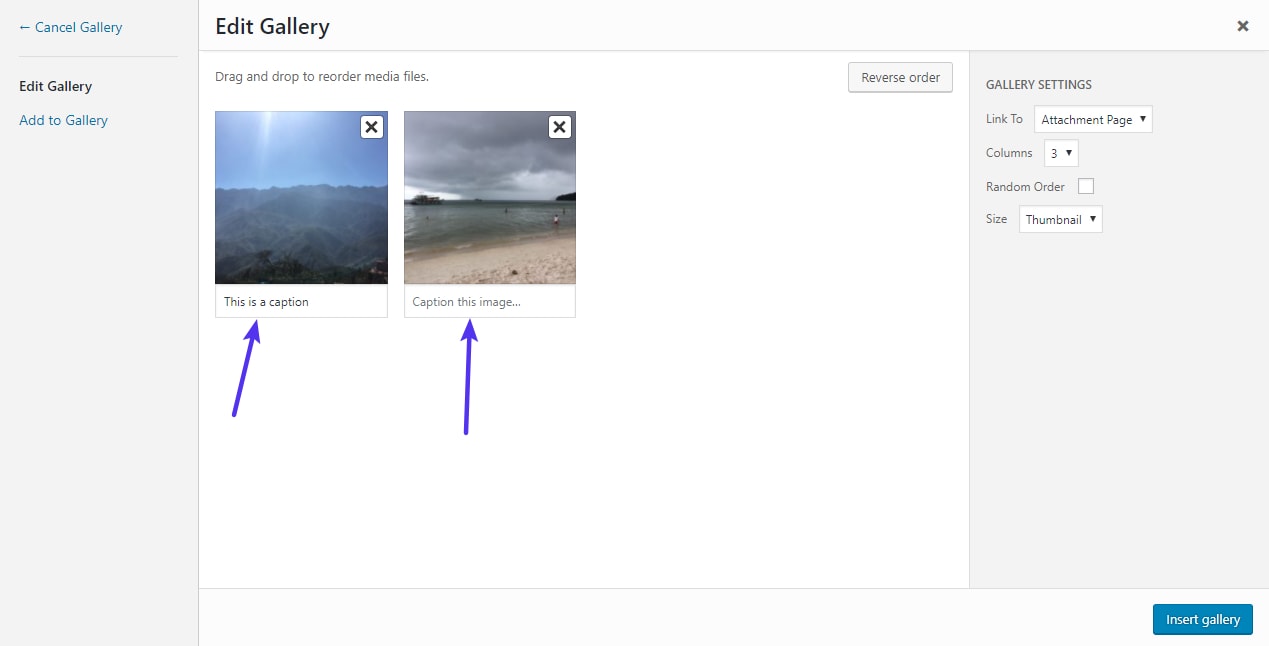 Editing the captions for images in a WordPress gallery

How to Change How WordPress Captions Look

Your chosen WordPress theme controls how the captions on your site look by default. For that reason, you’ll need to use custom CSS if you want to directly change how this default functionality looks for your theme.

With that being said, there is a popular free plugin called Image Caption Hover that lets you display image captions via 200+ different CSS3 hover effects.

This plugin does not allow you to change the static display of your image captions. But if you’re happy to only display image captions when a user hovers over one of your images, it’s a free option that gives you a good deal of control.

To add captions to your images using the plugin, you’ll first need to use the plugin’s caption builder to choose your hover effect and enter details for your caption. Then, you can use the provided shortcode to insert your image and caption anywhere on your WordPress site: 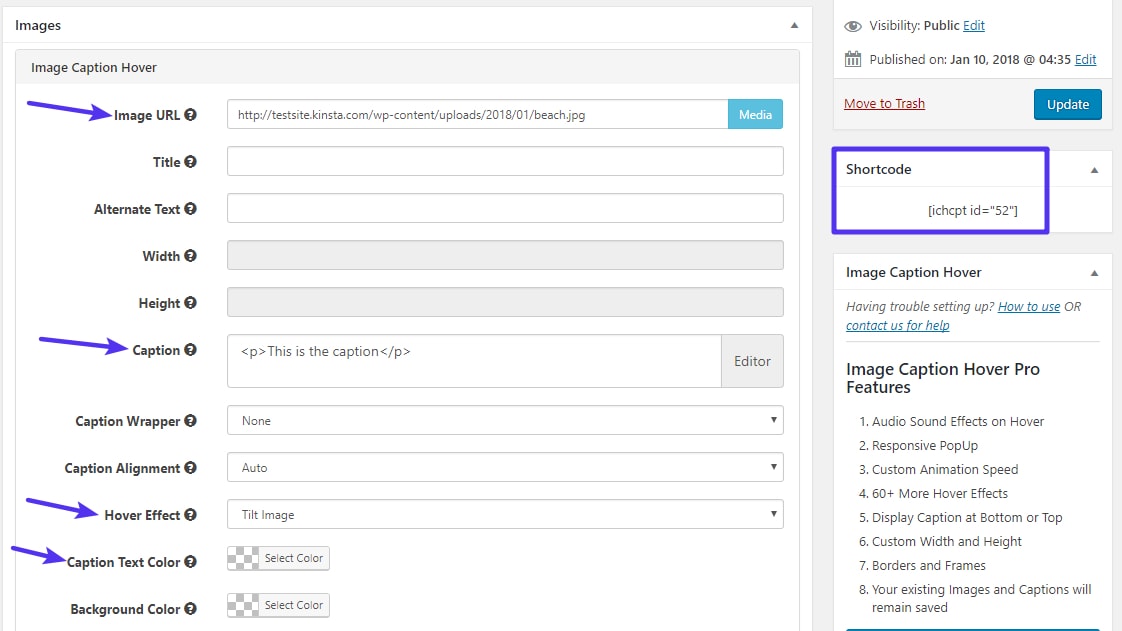 Once you add the shortcode for the image that you created with the plugin, you’ll see your new caption hover effect on the front-end of your site:

An example of a caption hover effect created by the plugin

How to Display Caption on WordPress Featured Image

To display a caption underneath your featured image, you can use the free Featured Image Caption plugin, which is designed to work with all WordPress themes.

Once you install and activate the plugin, you’ll get a new Featured Image Caption box in the sidebar of the WordPress editor: 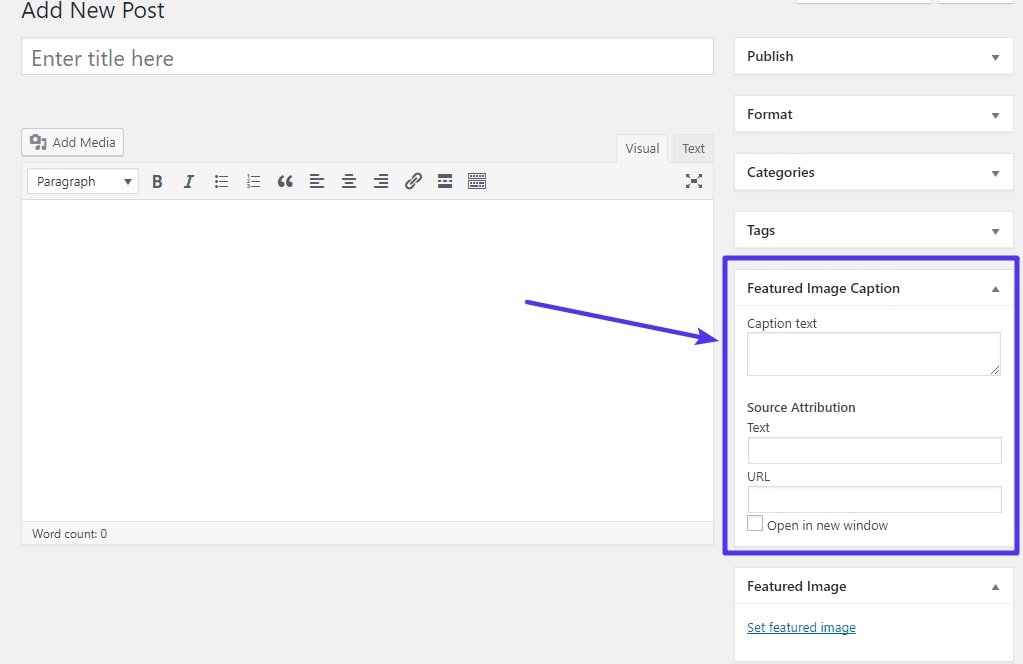 The new Featured Image Caption box added by the plugin

If you enjoyed this tutorial, then you’ll love our support. All Kinsta’s hosting plans include 24/7 support from our veteran WordPress developers and engineers. Chat with the same team that backs our Fortune 500 clients. Check out our plans

How to Quickly Fix the 401 Unauthorized Error (5 Methods)

How to Fix the WordPress Updating Failed and Publishing Failed Errors

How to Fix the “Upload: Failed to Write File to Disk” Error in WordPress