A vibrant comments section is a great way to build a sense of community on your WordPress site. But if you want people to actually comment and engage with your site, you need to create a space where people actually want to comment. And one WordPress plugin that might be able to help you do that is Disqus.

Disqus is an alternative comment system that you can use on your WordPress site. It has both positives and negatives, both of which I’ll discuss in this post. Then, I’ll give you a step-by-step guide to adding Disqus comments to your WordPress site if you think the pros outweigh the cons.

Disqus is a platform-independent comment system that you can use to completely replace the native WordPress comments on your site.

You’ve probably encountered Disqus comments at one point or another, whether or not you knew it. If you’re not familiar, the standard Disqus interface looks like this:

In order to leave comments, your visitors need to be signed into their Disqus account. But the neat thing is that this account isn’t specific to your site. So if they’ve previously created a Disqus account to comment on another site, they can comment on any other site using Disqus with that same account.

While the pros list might appear to outweigh the cons at first site, the privacy of your commenters’ data is something you should definitely consider before making the switch away from native WordPress comments.

How to Add Disqus Comments to WordPress

Assuming you want to go ahead with Disqus comments, I’m going to show you two different ways to get them set up on your WordPress site.

First, I’ll show you how to do it using the official Disqus WordPress plugin. Then, I’ll show you a secondary method using a popular plugin called Disqus Conditional Load.

Disqus Conditional Load handles both adding Disqus comments AND lazy loading those comments. That is, if you use it, you don’t need the official Disqus plugin.

I recommend the Disqus Conditional Load method because it will reduce your page load times. But I also understand if you prefer to stick with the official plugin.

Note – the process is identical no matter if you’re using Divi or another theme.

Add Disqus Comments to WordPress With the Official Plugin

Disqus’ official plugin is free and listed at WordPress.org, so you can install it directly from your WordPress dashboard.

Once you activate it, set up only takes a couple of minutes. Get started by going to Comments → Disqus. Then, click the button to Upgrade your database to support Disqus:

Next, you’ll see a screen asking for your username details. If you already have a Disqus account, you can enter them here. Otherwise, click the Don’t have a Disqus Profile yet? button and sign up for an account first:

If you’re signing up for a new account, Disqus will put you in a signup flow that gives you the option to choose I want to install Disqus on my site. If you already have a Disqus account that you just use for commenting (like I did), you can access this flow directly by going to this link: 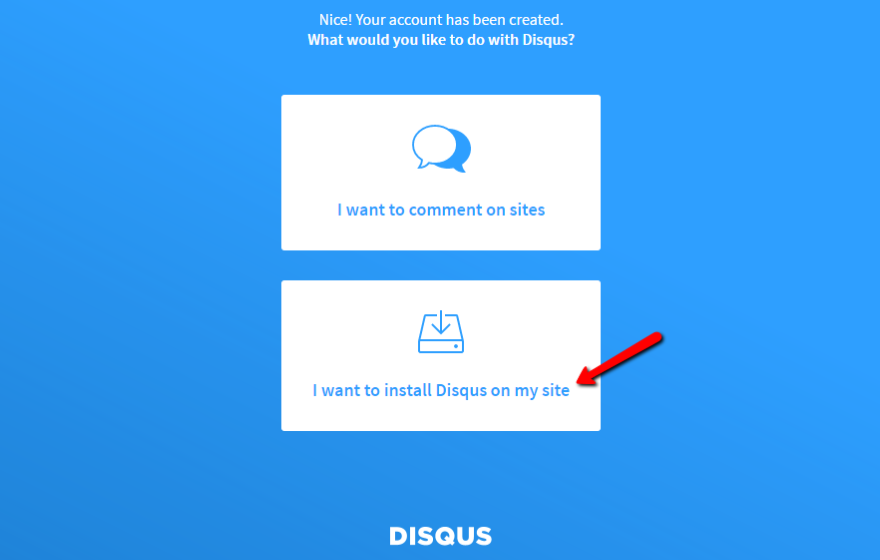 Then, give your site a name and a category and click Create Site: 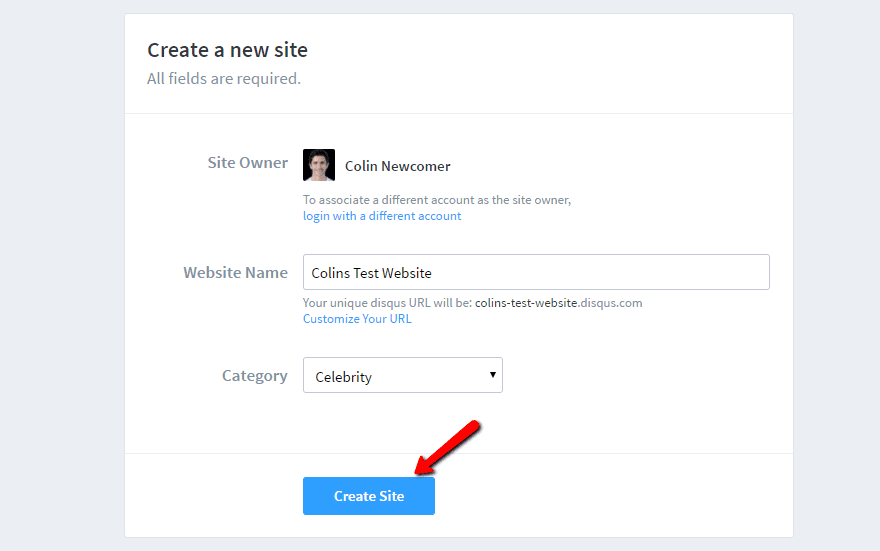 On the next screen, select the Basic plan unless you want to pay: 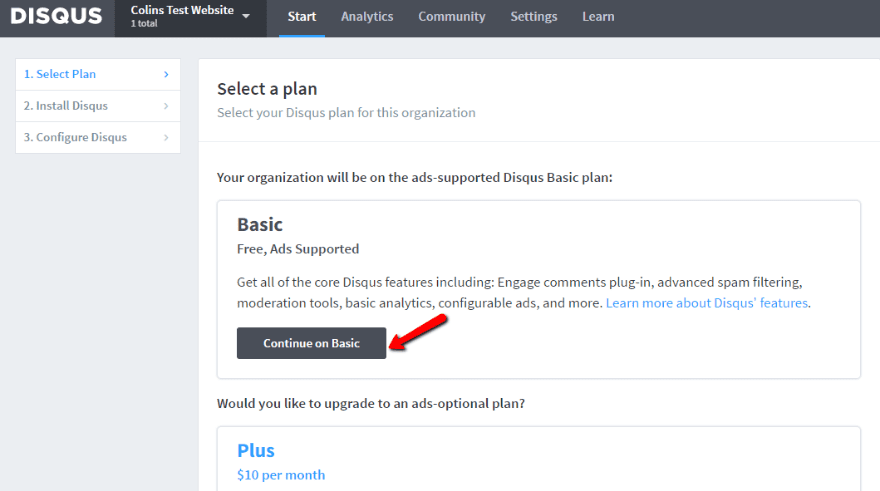 Now, you’re ready to hop back to your WordPress dashboard and log in to your Disqus account.

On the next screen, you can select the website that you created in Disqus’ interface:

And that’s literally all there is to it! Disqus comments are now active on your site: 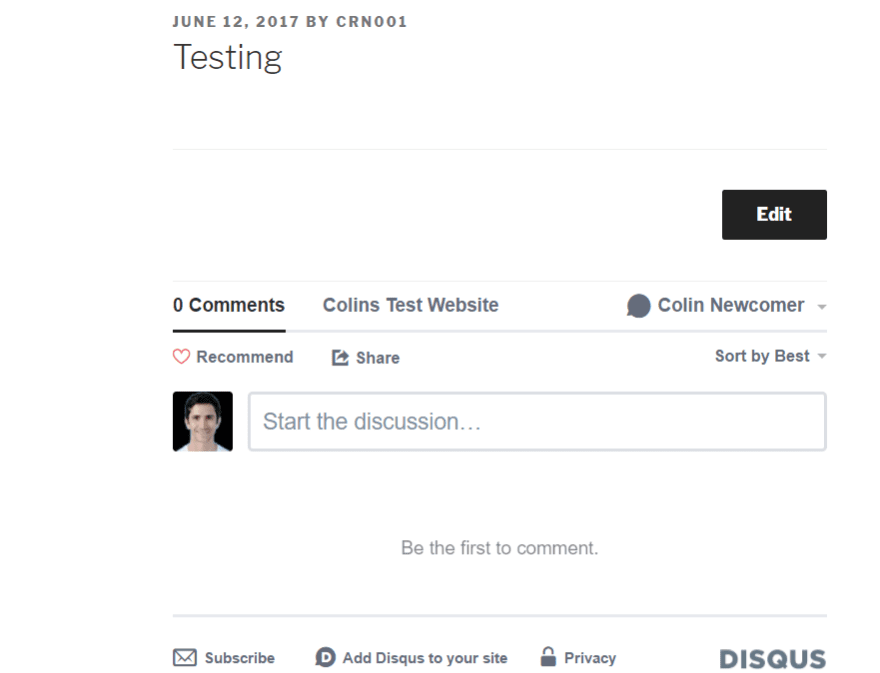 You’ll be able to moderate comments via the Disqus interface. You can also configure additional details about how your comments function from the Disqus website.

While Disqus Conditional Load is not an official plugin, it’s a standalone plugin that includes everything in the official Disqus plugin PLUS performance-enhancing lazy loading.

It’s also still quite popular, with over 10,000 active installs and a 5-star rating.

Like the official plugin, it’s free and listed at WordPress.org, so you can install it directly from your WordPress dashboard.

Once you activate it, the plugin does two things:

The first thing you need to do is go to Comments → Disqus and configure Disqus. Again, this is 100% identical to the official Disqus plugin, so you can just follow the steps I outlined above.

Once you configure the basic Disqus comments, head to the DCL Settings tab to configure lazy loading. In the free version, you have two options: 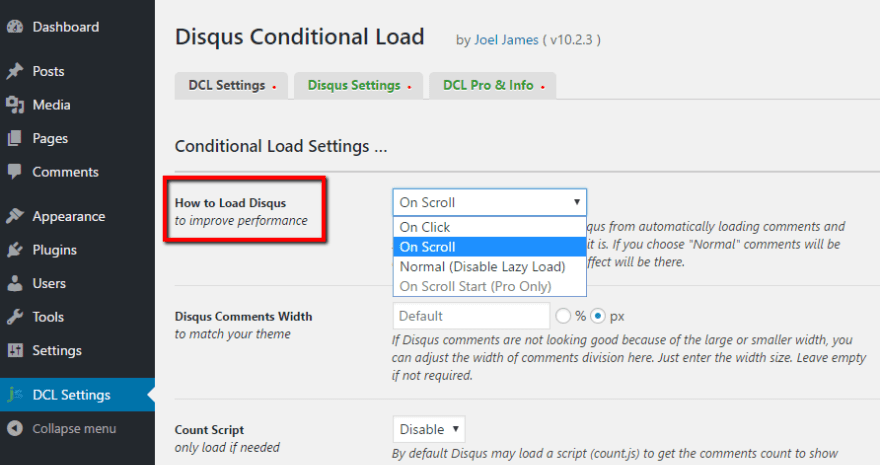 You can also configure other settings on this page pertaining to custom CSS, caching compatibility, and more. Usually, you can leave these as the defaults, though.

And that’s it – all the same Disqus functionality, but with better performance!

Which Plugin Should You Use to Add Disqus Comments?

To give you some data to further guide your plugin choice, I thought I’d run a quick test on my test site to see the difference in page load time between the official Disqus plugin and Disqus Conditional Load.

With the official Disqus plugin, my test site loaded in 763 ms.

Everything else about the pages was identical. As you can see, there is a very real performance benefit to using Disqus Conditional Load over the official plugin.

Disqus comments are one of those things you might just need to test for yourself. Plenty of webmasters have said that Disqus boosted their engagement…while others, like WP Beginner, say it did just the opposite.

The result for you may just depend on your specific audience and how much your audience has adopted Disqus.

Additionally, while you do get much-improved spam-fighting features, you should definitely consider the potential privacy implications for your commenters’ data before making your final decision.

Now over to you – what are your feelings on Disqus comments? As a commenter, do you prefer them to native WordPress comments or vice versa?